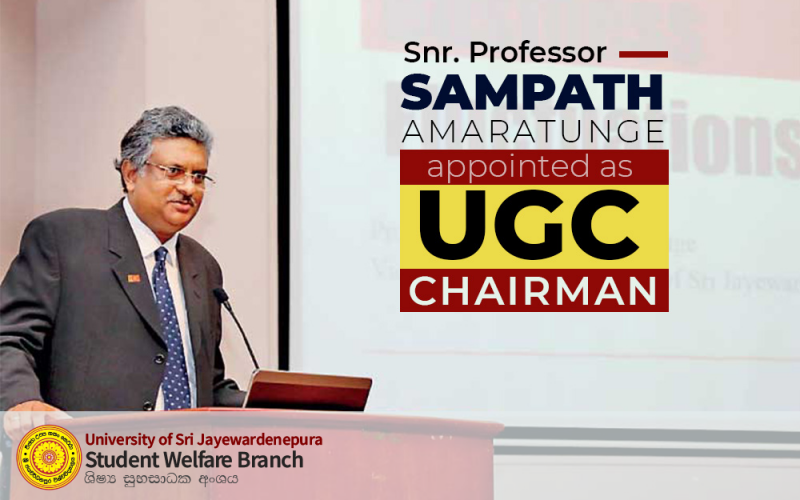 Sr. Prof. Sampath Ameratunge, the Vice-Chancellor of the University of Sri Jayewardenepura
was appointed as the Chairman of the University Grants Commission by His Excellency the
President Hon. Gotabaya Rajapakse a short while ago.

Furthermore, he was the driving force behind uplifting the University’s standard in terms of
research. During his period, he upgraded the Research Committee to a Research Council under
which 25 Research Centers function conducting timely research that is beneficial for the
development of the nation and all of humanity.

Within his period as the Vice-Chancellor he was appointed as the Chairman of the Committee of
Vice-Chancellors and Directors Sri Lanka (CVCD) 2019. Furthermore, he was elected as the
member representing Constituency II of the Association of Commonwealth Universities, United
Kingdom (ACU) in 2019.

In recognition for his services to the society and Buddhism as a religion he was awarded two
Doctor of Letters (D.Litt): His contribution was acknowledged first by the Dharma Buddhist
Institute Malaysia where he was awarded for his contribution to society and Buddhism in 2017.
He was also presented with an honorary degree (Sammanopadhiya) an equivalent of a D.Litt by
the unanimous agreement of the Vidyadara Sabhava of the Vidyodaya Pirivena, Maligakanda on
the occasion of the 107th commemoration of the Most Ven. Hikkaduwe Sri Sumangala Thero.
He is reputed to be the only Vice-Chancellor who has been awarded this honour.

University in Japan. An authority in Rural Economic Development, Sr. Prof. Amaratunge
has won several awards including the prestigious Research Excellence Award (2002) of the
Kyushu Society of Rural Economics, Japan. He has over 75 refereed publications to his
credit, both locally and internationally.